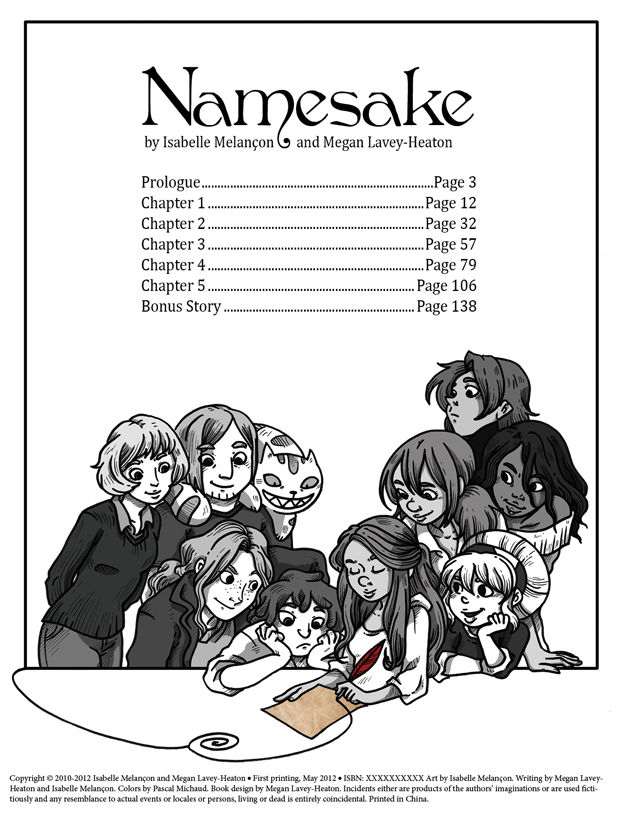 Kickstarter update
Posted February 15, 2012 at 12:00 am
Hey folks! Isa, Pascal and I are working very hard at getting the book files finished up! Included in today's extra update is the inside page featuring the main cast. I've gotten all of the redone artwork except for chapter 3, and we're actively still doing updates to the comic. Isa has also finished the bonus story, and I have it now!

The Kickstarter project will end next Thursday, so if you've been waiting to get in a pledge, time is running out! Both of us are greatly appreciative of everyone's faith in us, and we're so excited to see volume 1 of Namesake finally reach print!

In addition, as an extra special thanks, we're giving away bonus art to everyone in the $25 reward bracket and up. These were pin-ups that we felt might be a bit too risque to offer as a reward, but are still tastefully done. Think of our main cast in corsets and tight underpants! Those who bid $35 or more will also still get the character bonus art that is based on the tarot, and we'll have previews of both soon. This is just an extra-special thanks to everyone for all of your support!
Comments
Con Schedule