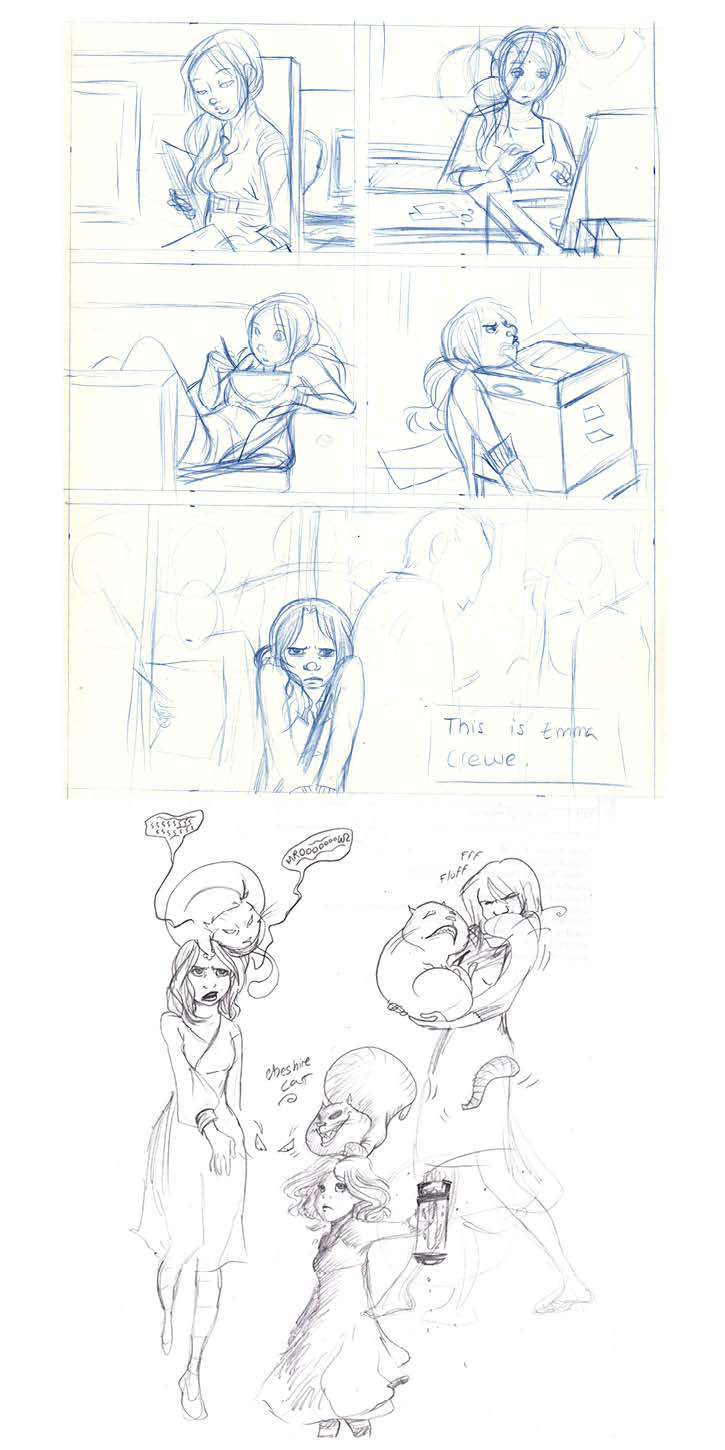 Isa says:Â The first image is the original first page draft. This page was scrapped, but I still love it. It's original purpose was to show how introverted Emma was, but it ended up just making her look busy and lonely. Emma isn't all that lonely, she kinda likes being alone. We ended up using Ben to do exposition about Emma's life, which ended up being more efficient and funny. The shot of Emma carrying huge boxes was kept, allowing for some funny dialogue with Ben in their first appearance. My favorite panel here is Emma being squashed in the subway.

This has yet to happen, but something I loved to draw was Emma with the Cheshire cat because... Well, just look at that adorable jerk. The Cheshire Cat is like the ultimate cat. He's got all the bad cats habits. Plus superpowers and the ability to talk. He'll ruin your furniture and then give you a monologue about how it's better that way.

Meg says:Â Oh wow, the first chapter. Remember how on Tuesday how I said the prologue made it into comic form pretty much intact? The first chapter went through an insane amount of revisions. Nothing we tried felt quite right. The very first take on chapter 1 involved Emma and Elaine discussing her homework in a cafe. That got scrapped. Then we moved to version 2 which had Emma finding Elaine outside the library after the fire. Ben and Elaine take Emma home and Emma turns on the air conditioner, which explodes and sends her to Oz. Meanwhile, Jack and Alice are trying to find out about the arson, an unknown Namesake being sensed in the area and Karen. This draft was written in April 2010.

Originally, Jack, Alice and Ben weren't to be introduced until much later in the story. We weren't going to mention Calliope at all until Emma returned from Oz. But all three of them wrote themselves into version 2 of chapter 1, and I think the story worked out much better in the long run because of it. Version 3 is the one you see on the site, with Vanessa added and Karen an actual character.

Like the prologue, chapter 1 was written in prose form. This is the beginning of it:

For centuries, there have been people like me recording the stories of other people. You know them as fables, fairy tales, and mere childrenâ€™s stories. For us, these are real and vital parts of our lives. We know these people, the ones that actually live out those stories that you believe are fiction. We witness the story come to life â€“ the beginning, middle, climax and resolution.Â

Most stories start out with what is called in French, â€œthe element declencheur.â€

EmmaÂ pushed her way through the crowd that pressed up against the police barriers, the flimsy wood barely keeping the curious gawkers from getting any closer to the fire that consumed the building a few meters away. A gap formed and she spotted her sister, Elaine, calmly clicking away on her cell phone as she took pictures of the blaze.

Â "Elaine! Are you okay?"Â EmmaÂ greeted her, then coughed violently as the thick smoke wafted through the area. "Dad called me at work. He was just boarding his plane and got your text."

Â "I'm fine," Elaine replied, her eyes bright with excitement. "I'm posting these to my LiveJournal."

"The library catches on fire with you inside and you're posting about it on LIVEJOURNAL?"

Â "I got out, didn't I?" Tongue between her teeth, Elaine pressed a couple buttons on her phone then pressed the button to turn off the screen. "Itâ€™s up on Twitter already.â€
Comments
Con Schedule